Time is of the essence... 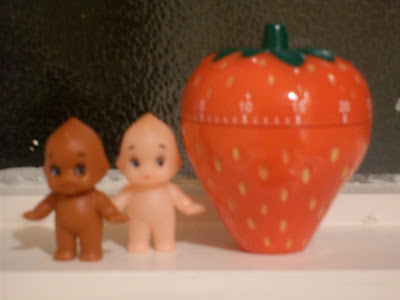 I've come to the sad realisation that my camera really doesn't like to do close -ups but it will have to do for now :(

Before I had children I perceived the passing of time very differently. Time until the next piece of writing, next exhibition or next project was due was measured in weeks and months. There were hours and hours to be filled up with reading, sleeping or going out for breakfast. Now my days and weeks have a very different rhythm and even though I get up at 6am every morning (Henry's choice not mine!) there still never seems to be enough hours in a day.
Enter the kitchen timer. It's a godsend when I'm cooking and constantly being called out of the kitchen to find books, scissors, textas, toys but I have also found some other less orthodox uses for it. I first got the idea one day when I was with my mother's group and the children were having trouble 'sharing'. My friend just whipped out a timer, gave it to her daughter and told her that when the timer went off it would be time to pass the toy onto the next person. 60 seconds later - bing! eh voila the child happily passed it on to the next kid.
What strange magic was this I asked myself? Since then I have used it at home to let the kids know when it is time to get out of the bath - bing! and they spring out. It's time for lights out - bing! and the lights are extinguished. It's time for Mummy to leave now - bing! well, it works some of the time. I'm sure that the novely will wear off eventually but until that time I am happy to bow to the wisdom of the strawberry.
Posted by Caz at 4:35 PM