Melbourne Belongs To Me 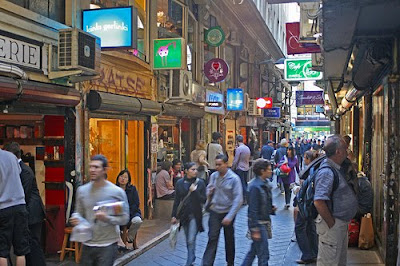 'This is where I belong,' he told himself. 'I belong to London and London belongs to me...'
London Belongs to Me by Norman Collins

Recently I have been reading a number of books that explore the notion of place and belonging. For Inspector Montalbano there is no place like his fictional home of Vigata, Sicily home to his favourite restaurant the Trattoria San Calogeno and the rock beneath the lighthouse where he goes to think with a bag of chickpeas and pumpkin seeds he buys at a stall on the way there. For Mr Josser in 'London Belongs To Me' it is Battlebury and Sons where he has worked all his adult life and for Holly Golightly in 'Breakfast At Tiffany's' life is a never-ending search for a place that makes her feel as safe as she feels at Tiffany's.

So what is it to belong to a city? Do I belong to Melbourne? Does Melbourne belong to me? In his essay Novel and Place writer James Bradley talks about the fact that many writer's views of a city have been coloured by their own childhood memories. My earliest memories are indeed childhood ones when we would come to the city to meet up with my aunties and cousins in one of the many department store cafeterias that existed at the time (Coles, Myer, Waltons etc). As we got older it was movies in Bourke and Russell Streets often followed by lunch or a snack at the London Inn, an incredibly atmospheric little coffee lounge where we would invariably have grilled tomato, cheese and bacon.

As a teenager I started coming to the city on the train with friends and I remember Mum making us recite the city grid from the station so we wouldn't get lost, 'Spencer, King, William, Queen, Elizabeth, Swanston, Russell, Exhibition, Spring'. We didn't bother much with the grid going the other way as there was an unspoken rule that we would stick to Bourke and Collins Streets. When I finished school I went to university in Melbourne and since graduating have always worked in the city. Over the years I have seen the city grow to the south and the west and have delighted in the growth of laneways as places to explore food, fashion and art. I love the intimate feel of Melbourne, its nooks and crannies, its mix of edwardian, art deco and contemporary architecture. I love the fact that it is still a city on a human scale defined by the wonderful Hoddle grid. So yes I think I can safely say, 'I belong to Melbourne and Melbourne belongs to me'.
Posted by Caz at 2:21 PM