Tale of a teacup 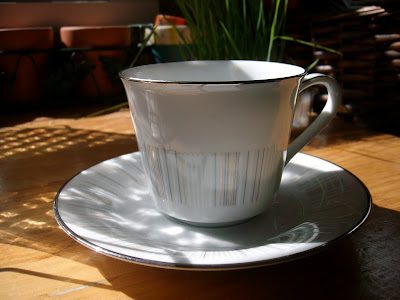 I love everyday objects and the power they have to acquire meaning over time based on how, when, where and by whom they have been used. Over the years I have been continually drawn to them whether it has been in my studies in archaeology or in my work with contemporary objects in the museum where I work. Recently I have been exploring the history of everyday objects a little closer to home as we sort through the contents of Mum and Dad's house. At times this has been a fairly emotional journey but there have been some lovely memories and surprises along the way.

Before Christmas, while carefully packing up my parents 'special' crockery and cutlery I came across this teacup and saucer (one of a set of four matching cups, saucers and side-plates) produced by the Japanese company Noritake. According to the Noritake Australia website 'by the late 1960s Noritake had become a household name and such was its popularity almost every Australian couple married during this period received a Noritake dinnerset as a wedding present'. I'm not sure how Mum acquired this set but it may well have been as a wedding a gift as she was married in 1966. The pattern was produced between 1964 and 1982 and has a very 60s feel to it with its geometric stripes in white, grey and gold complimented by a platinum rim.

Mum was very fond of this set which she always referred to as her 'Noritake', never the stripey cups or the 60s set, so when I came to wrapping it I took extra care. I was by myself in the half empty house waiting for my sister and feeling a little sorry for myself. As I held the cup in my hand I turned it over to see the famous Noritake backstamp then caught my breath - the pattern was called 'Isabella'. Now every morning as I sip my tea from this cup I feel a restored connection between grandmother and grand-daughter.
Posted by Caz at 2:16 PM