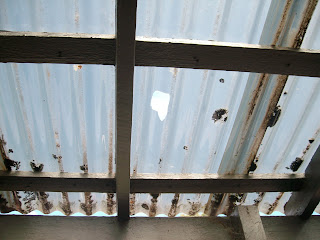 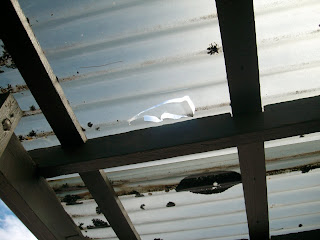 Yesterday we had the most incredible storm in Melbourne - 26mm of rain in one hour, 100km an hour winds and enormous hail-stones. It all happened so quickly. The weather forecast had said 'chance of a thunderstorm' but no-one was prepared for such wild weather. Isabella and I were sitting at the kitchen table colouring (as you do) and watching as the sky darkened. It was about 2.30pm. I've been trying to convince Isabella that you don't need to use lights inside during the day but by the time the storm hit at 2.40pm it was almost like night! As we looked out the window we saw the wind just suddenly gust up and the next thing we knew hail the size of golfballs was smashing into and bouncing off the windows. As you can see from the photos above they just came straight through our verandah leaving several holes.
Henry had been sleeping and came tearing out of the bedroom and Tom raced to make sure that our cars were undercover. Although it was tempting to stand looking out the windows at the weather I was screaming at everyone to move away from them as I really thought they would break at any moment. I wish that I'd taken some photos at the time but it was all over so quickly and while it was happening it was both too scary and too mesmerising.
Posted by Caz at 3:21 PM