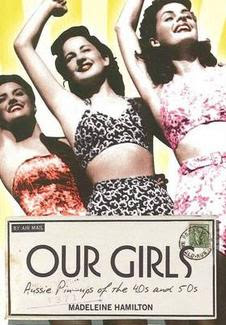 I recently finished reading 'Our Girls: Aussie Pin-ups of the 40s and 50s' by Madeleine Hamilton, a fascinating account of the women who posed for pin-up photos both during and after World War II. The book looks at the changing motivations of these women and is full of wonderful details of the era gleaned from first-hand accounts, fan letters, photographs, newspapers and magazines.
What comes through most strongly during the Second World War section is that many girls posed for photographs out of a sense of 'patriotic duty'. These girls were not models but ordinary girls who were seen as representing 'the flower of our young womanhood' - fit, tanned, simple and direct. These were different, pre-feminist times. Names and addresses were published alongside photographs of pin-up girls and many girls recieved mail from servicemen both in Australia and overseas. Some were 'adopted' as company mascots and entered into routine correspondence with soldiers. They also received lots of local fan-mail which some girls found amusing -others found it intrusive.
After the War things changed somewhat. Some girls decided to pursue fashion and photographic modelling professionally although for most girls the beauty and beach contests sponsored by local newspapers during the 1950s merely represented a moment in time between 'girlhood and marriage'. Addresses continued to be published and girls continued to recieve fan-mail. Looking through some family photos yesterday I came across just such a letter! It was dated 6 May 1963 and was addressed to my 22 year old mother (before she met Dad). It was from a boy called 'Les' and starts:
'I hope that you will forgive me for writing this letter to you but I saw your photograph in 'The Herald' last week and as I will be in Melbourne next week I am taking the liberty of inviting you to come to the pictures with me on Thursday evening.'
The letter goes on with Les explaining a little about himself and suggesting that they meet in front of the Myer department store in Bourke Street at 7.30pm (I'm not sure whether or not the newspaper mentioned that Mum worked at Myer or whether it was just a convenient central meeting place). I'm pretty sure Mum would not have turned up for the date and I wonder what my grandparents would have made of it.
Ah, the secret life of parents!
Posted by Caz at 10:17 AM