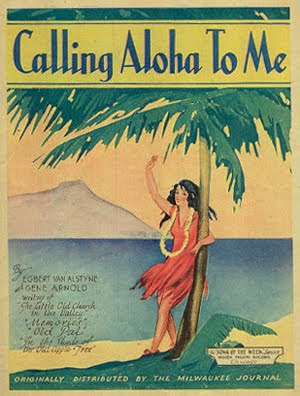 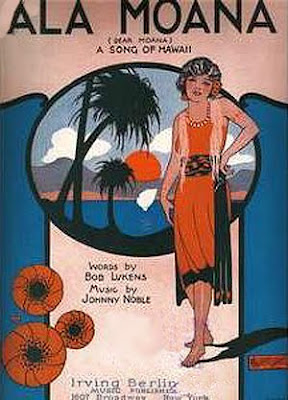 I was thrilled to see through the comments on my last post that some of you share my fascination with the ukelele! So now I'm going to let you in on a little secret...I have a bit of an obsession with all things Hawaiian. I'm not sure when it started but I know it peaked sometime during the late 90s when I was researching dance bands in Melbourne in the 1930s and 1940s.
So here for your edification are a few little bits of Melbourne/Hawaiian music history for you. The first Hawaiian troupe came to Australia in 1911. It was lead by Ernest Kaai, a Hawaiian musician interested in jazz. He visited Australia again in 1924 and 1926 playing both traditional Hawaiian music and a style known as 'hapa hoale' (half white) which was characterised by the Tin Pan Alley style of lyric and musical composition made popular through sheet-music and movies during the early part of last century.
During the 1930s Hawaiian Clubs popped up all over Australia with the Melbourne Hawaiian Club opening on the corner of Collins and Swanston Streets (where the City Square is now). Here you could learn steel guitar, ukelele and even hula dancing. There was also a small midnight cabaret venue there during the Second World War called the Blue Lagoon. The interior of the club was painted blue with dim lighting and lots of palms helping to create the desired atmosphere.
For those of you familiar with the Melbourne seaside suburb of St Kilda there was also a large Hawaiian-themed venue on The Esplanade know as the Palm Grove (previously Earl's Court and subsequently The Venue before it was demolished in the 1990s). Here musicians such as Jim Jensen's Hawaiians, The Hawaiian Kings and Les Adams Hawaiians served up swing-inspired Hawaiian music for American servicemen and their partners. Unfortunately there has been very little written about these places and few photographs seem to be in the public record.
So there you go. More arcane knowledge from my endless store of trivia. If you're in Melbourne and feel like catching some sweet Hawaiian tunes you might like to go and see The Ukeladies perform or maybe even join the Melbourne Ukelele Kollective. If that's not your thing you might like to teach yourself to play using one of the many tutorials on YouTube or you could hunt down this book for the great photos and illustrations.
Posted by Caz at 10:33 AM