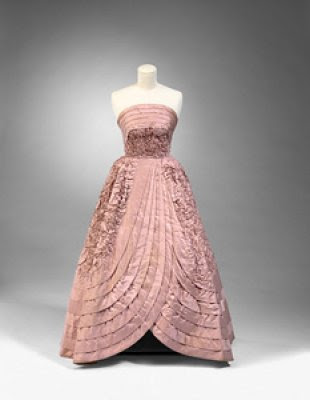 Evening gown 1954 by Hall Ludlow, Melbourne
silk, Vilene, acetate, nylon, polyester, metal, cotton
National Gallery of Victoria, Melbourne
Gift of Mrs Adrian Lowe, 2005
Yesterday we finally made it to Australian Made: One Hundred Years of Fashion at the NGV. The hundred years in question are the 1850s to 1950s and although that is quite a timespan the exhibition is quite modest in scale. That being said every outfit, hat and shoe deserves its place in the show. The earliest example comes from 1855 (at the height of the Victorian goldrush) and is made from cotton, silk, metal, mother-of-pearl and baleen (whale bone). Incredibly, it was sewn entirely by hand by an unknown maker predating the general use of sewing machines. At the other end of the timescale is a beautiful ruched and pleated strapless evening gown by Melbourne designer Hall Ludlow (pictured above). 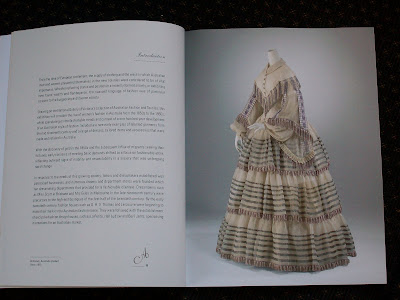 Dress, c1855. Maker unknown, Australia.
National Gallery of Victoria, Melbourne
Gift of Mrs Micheal Parker, 1983
It was the shorter evening gowns from the 1920s, however, that really caught my attention, initially on purely aesthetic grounds but then by a personal connection. Four of the items on display were donated by a wonderful woman I first met when I was just starting my career and she was just finishing hers. Her name was Irene Mitchell. Renee was an actor, director, teacher, head-honcho at St Martin's Theatre and mentor to literally thousands of theatre professionals in Melbourne and by extension Australia. She was an icon on the local scene from the 1940s to the 1990s and even in advanced age she was still a force to be reckoned with. She still had an amazingly rich, rounded voice that projected to the back of the room and she commanded great respect form all those who knew her. She wore wonderfully over-sized jewellery and carried herself with great dignity - a true grande dame of the theatre. You can find a lovely photo of her here and more information about her career here). 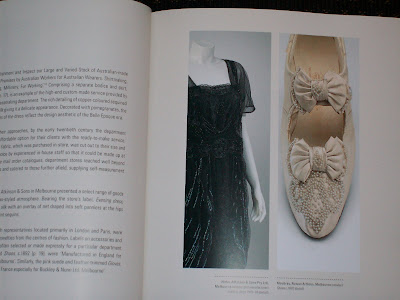 Pictured above is one of the gowns she donated to the Gallery in 1975. It was made in 1919/20 by Hicks, Atkinson & Sons Pty Ltd in Collins Street, a retailer with an 'elegant European atmosphere'. It is described by the curator as being made of 'black silk with an overlay of net draped into soft panniers at the hips and decorated with iridescent sequins' and tiny glass beads.

If you are in Melbourne you really should go and take a look at this show. It may not be as big as some of the 'Winter Masterpiece' exhibitions but every piece in it is a jewel.

PS: You may remember that I was tagged recently by Style Wilderness. In turn I've tagged Debby at Cooking Up A Storm In A Teacup and Estelle at Curbside Style so why don't you go and have a look at their funny, witty, interesting answers?
Posted by Caz at 11:05 AM