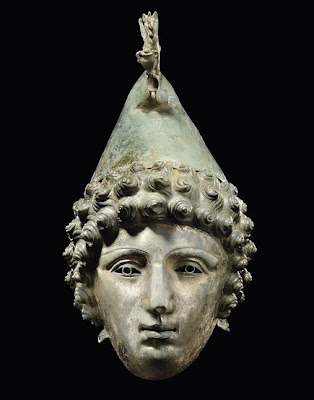 Have you been following this story? This exquisite Roman bronze ceremonial helmet with full face mask was found on farmland in the hamlet of Crosby Garrett in Cumbria earlier this year. Until recently it has been on display at the local Tullie House museum just near Hadrian's Wall. When the owner decided to sell the helmet, Tullie House undertook a fundraising campaign asking people throughout the country to donate to a fund designed to keep the helmet in Cumbria. The estimated asking price at the Christie's auction was 300,000 pounds. Within weeks the museum had raised a staggering 1.7 million pounds much of which was made up of small donations by members of the public.
As a curator myself I would say the museum's representatives went along to the auction quietly confident. Imagine their dismay when the bidding soared past their best offer and the helmet was whisked away by an anonymous phone bidder for 2 million pounds? What a crushing blow for the people of Cumbria (and the rest of the country) who had tried so hard to keep the helmet where it was used in Roman times and where it lay in wait for hundreds of years until a man with a metal detector came along. Life just isn't fair sometimes is it?
Posted by Caz at 8:57 PM