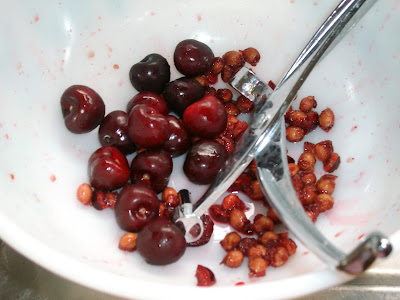 One of the things I love about Summer is the arrival of stone fruits - nectarines, peaches, apricots and especially cherries. It just wouldn't be Christmas without cherries. A few years ago I bought this cherry pipper (or is it pitter?) and my life changed for the better. You know how it is when you find a fabulous gadget and you wonder how you lived without it?
Recently I was asked to bring a cheesecake to a Christmas party so I decided to make a vanilla and chocolate swirl one. Being a novice cheesecake maker the top of the cheesecake cracked outrageously so I improvised a cherry topping and if I do say so myself it was the right decision. The cheesecake itself was quite sweet so the cherry topping gave it some much needed bite.

Vanilla and Choc-Cherry Cheescake
200g Nice biscuits (any sweet biscuit would do)
105 g unsalted butter
500g cream cheese (room temperature)
200g light sour cream
3/4 cup caster sugar
2 eggs
1 tsp vanilla extract
150 g dark chocolate
Topping
500g cherries (pitted and halved)
1 tablespoon cold water
1 tablespoon cornflour
Method
1. Line a 22cm springform pan with baking paper.
2. Melt butter in a small saucepan over a low heat. Crush biscuits in a food processor then combine the crumbs and butter. Press into base of pan and refrigerate for 20 minutes.
3. Melt chocolate in a bowl over hot water (don't let water touch the bowl). Allow to cool.
4. Preheat the oven to 160C (140C fan-forced). Beat cream cheese, sour cream and sugar until light and creamy. Add eggs one at a time beating well after each addition then mix through vanilla extract.
5. Pour half the cream cheese mixture into base. Spoon in melted chocolate then top with remaining cream cheese mix. Use a skewer to swirl the chocolate around without over mixing.
6. Bake for 40-45 minutes or until cheescake is just set. Turn off oven and cool in closed oven. Chill for at least 3-4 hours (or overnight).
7. Place water and sugar in a saucepan and bring to the boil. Add pitted, halved cherries. Mix one tablespoon of cold water with one tablespoon of cornflour (or arrowroot). Add to cherries and stir unitl thick. Allow to cool slightly then pour over cold cheesecake. Refrigerate for 30 minutes or until set.
As this was the first time I'd made this recipe (and it was a boiling hot day) I took it to the party still in the tin so didn't get any good photos but here it is with its enormous cracks... 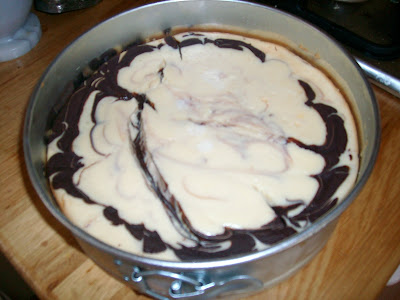 and with its glossy topping... 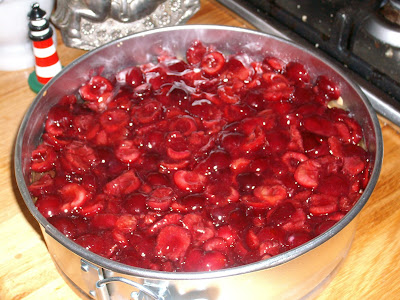 I'm pleased to say that when we did unmold it it stood up proud and was roundly praised by all who tried it so if cheesecake is your thing keep this one in mind?
Posted by Caz at 9:36 PM