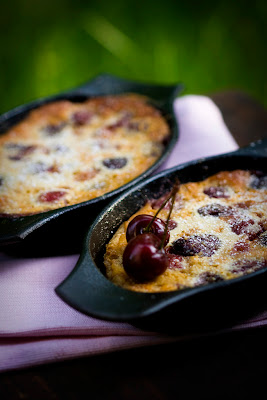 Lately I 've been on a bit of a dessert bender which is a bit odd really as we are not traditionally a dessert family. Most meals end with fresh fruit but the cold weather has sent me into a baking frenzy. It all started innocently enough with a little Gordon Ramsay cherry clafoutis. I've made many clafoutis before but this one is definately the best. I think the secret ingredient is the almond meal. Many other recipes are really more like a baked custard but the almond meal really lifts the dish.

I do love almond meal and always have it in the fridge so it was only a small step to making a chocolate tart with almond pastry. Lo and behold the recipe yielded far too much pastry so of course I had to use it to make a lemon tart which disappeared faster than I could whip the camera out!

Last night I made Sticky Date Pudding - the first but probably not the last for the year. I used Jamie Oliver's Sticky Toffee Pudding as a starting point but I chopped the dates rather than puree them and replaced the caster sugar with brown sugar and the Ovaltine for orange zest. The result was delicious but as usual I forgot that we are not a family of 8 and I now face the prospect of eating it again today (how terrible).
Posted by Caz at 11:04 AM