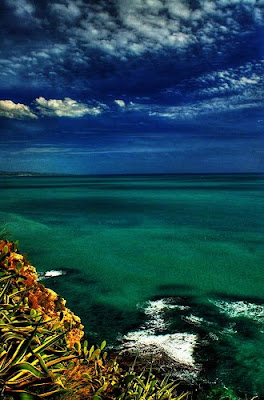 Originally uploaded to Flickr on March 28, 2007by Macorig Paolo

Inspired by Inspector Montalbano's passion for Sicilian cuisine I recently splurged on a lovely new cookbook called Spring In Sicily. Not only does it have 60 or so delicious recipes but it's packed with hundreds of coloured photographs showing off the island's amazing scenery, built heritage and abundant natural produce. As Austalians were initially introduced to Italian cuisine in the 1950s by a wave of post-war migrants from southern Italy (particularly Calabria and Sicily) it's not surprising that there is something quite familiar about this style of food.
Some of the Inspector's favourites are there like Sarde Beccafico (fresh sardines stuffed with breadcrumbs, pine nuts and currants) but his favourite Pasta 'Ncasciata, a baked pasta dish that has to be seen to be believed consisting of among other things pasta, minced beef, salami, boiled eggs and bechemel sauce, is not. On a whim I decided to 'google' it and low and behold there were pages and pages about it many of them referring back to the Montalbano series.
Although I'll have to work up to the Pasta 'Ncasciata, I have cooked a couple of things from the book already including Polpettine con Ricotta and Insalata Pantesca (potato, tomato, olives and red onion dressed with capers, oregano, basil and olive oil) and I'm itching to try the Gelo di Anguria (Watermelon Jelly decorated with pistachios) and sweets using ricotta as the hero ingredient.
Posted by Caz at 9:09 PM