Looking Back on The Year of Reading Backwards... 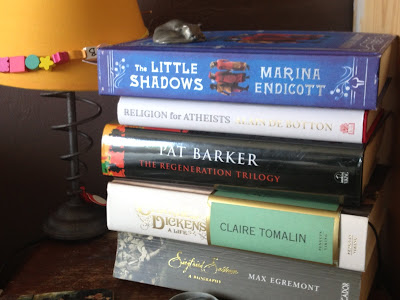 I know it's a cliche but can you believe it's March already! Before the year runs away with me completely I thought I might do a bit of a year-in-review to round up last year's Year of Reading Backwards . Some of you may remember that my aim was to:

So how did I fare? Well, I'd say it's a bit of a mixed score-card. I read 26 books in total (not including about a million kids books!) of which 14 fitted into the 'Year of Reading Backwards' category. Of those I'm particularly glad I finally caught up with The Woman In White by Wilkie Collins, 1984 by George Orwell and I Capture the Castle by Dodie Smith. After reading such gems of course I wondered why it had taken me so long to get around to them!

As for the re-reading well I'm afraid to say the year just served to confirm my suspicions (or so I thought...). For much of the year I just couldn't bring myself to pick up a book I'd already read. It just seemed like such a waste of time. For the sake of the experiment I did re-read, A Room With A View by E.M. Forster and The Unbearable Lightness of Being by Milan Kundera but I must say that as much as I enjoyed them I didn't enjoy them as much as I had on first reading (perhaps that's because I was in Paris just having visited Florence when I read the former and read the latter when it was a much anticipated and acclaimed new release). Perhaps my pleasure in reading, like many people's, is tied up with time and place? Having said that, my year in reading ended somewhat surprisingly when I found myself so engrossed in Erin Morgenstern's The Night Circus that having finished it I immediately flicked back to the first page and read it through again!

I'm still intrigued as to why people choose to re-read (or not). In her article, The Pleasures and Perils of Rereading , Lisa Levy discusses quite of few of those reasons chief among which seems to be the pleasure and security derived from returning to a book as an 'old friend'. For others it is the satisfaction that comes from pulling apart a text to really get behind the authors craft and intent. The perils include the very real possibility that you may return to the 'old friend' only to find that it no longer 'speaks to you' bringing to an abrupt halt a life-long love affair (perhaps this is my secret fear?).

So this year I'm challenging myself in a completely different way and have signed up to the War Through The Generations Reading Challenge. The theme for this year is World War I so I'm giving myself another chance to finally read Pat Barker's Ghost Road trilogy which was on last year's list. I'm also planning to read Ernest Hemingway's A Farewell to Arms, Vera Brittain's Testament Of Youth and Max Egremont's biography of Seigfried Sassoon. Perhaps you might like to join in too? You can read as little as one book if you like and there is a great reading list to help get you started.


P.S: I mentioned in a previous post that I am now 'tweeting' as well so if you would like to follow me you can find me @Birdwiththegold.

EDIT: I've just discovered the Australian Women Writers 2012 Reading and Reviewing Challenge and signed up for that too. More details soon...