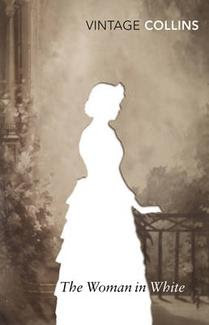 Image via Yowser! What can I say about Wilkie Collins' The Woman in White except that it's a cracking good read? If you like a bit of 19th century mystery, madness and mistaken identity then this is the book for you. The story was first published in weekly installments in Charles Dicken's, All The Year Round before its publication as a novel in three volumes in 1860. As you would expect from a story that originated as a serial there are plenty of twists and turns and cliff-hanger moments both large and small. The book also features the redoubtable Marion Halcombe (the very antithesis of all those silly, simpering 19th century heroines) and the wonderfully vainglorious villian, Count Fosco. I'd read the book again just to feel Marion's righteous indignation and to re-acquaint myself with the charmingly manipulative Fosco and his pet canaries and white mice. Intrigued? If you haven't already had the pleasure (or should I say thrill?) maybe this is one to put on your list... Next books in The Year of Reading Backwards take me firmly back into the 20th century as I tackle George Orwell's 'Animal Farm' and 'Nineteen Eighty Four'. Sorry about the lack of paragraphs - can't seem to change the spacing!
Posted by Caz at 2:23 PM

Labels: books, The Year of Reading Backwards, Woman In White