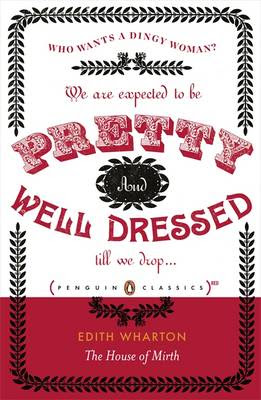 You may remember that I've decided to make this The Year of Reading Backwards. For my first book I chose Edith Wharton's heart-breaking story of socialite Lily Bart, The House of Mirth. Set in New York during the 1890s poor Lily just can't take a trick - in fact you'd be hard-pressed to find a greater self-sabotager in the whole of English literature. Although she arguably meets her perfect match in the very first chapter her inability to choose between marrying for love or money leads her to make a string of unfortunate choices that lead her further and further from her goal of security and happiness. I wanted to throttle Lily much of the time but Wharton's insightful and sympathetic prose kept me reading long into the night.

No sooner had I finished the sad tale of Lily Bart, however, than I found myself backsliding into the world of new releases with Franklin and Eleanor: An Extraordinary Marriage by Hazel Rowley - and I'm so glad I did. Eleanor Roosevelt was everything the fictional Lily is not. Like Lily, Eleanor was a member of the New York 400 and was bought up to make a 'good marriage'. Unlike Lily, however, she married for both love and money making a formidable match with her distant cousin, Franklin D. Roosevelt.

What an extraordinary couple they were! Both as a couple and as individuals they continually challenged themselves and each other to fulfil their individual destinies. Imagine becoming the president of the United States without anyone realising that you couldn't walk (Franklin was struck down by polio in his 30s and his minders ensured that he was never photographed being carried anywhere - how times have changed!). Eleanor herself was a remarkable woman championing civil rights, helping to draft the Universal Declaration of Independence and transforming herself from a shy young woman to an inspirational national figure. Sadly Australian biographer Hazel Rowley died just months after her book was released to critical acclaim. She was 59.

Next book in 'The Year of Reading Backwards' is 'The Woman In White' by Wilkie Collins. Have you read it?
Posted by Caz at 9:27 PM