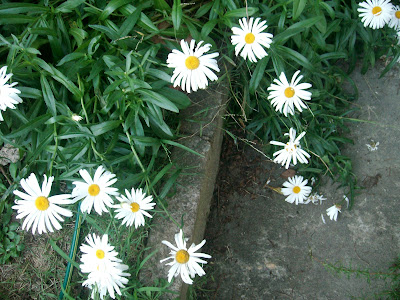 School holidays have been over for nearly two weeks and I still can't seem to get back into the daily routine. The days just seem to whizz by. Here's how I've been spending them..
Reading the Millenium Trilogy by Stieg Larsson. I'm a bit late on the bandwagon but they've been worth the wait.
Listening to lots of classical music. Henry has discovered classical music in a big way. He listens to it when he's going to sleep, in the car and anywhere else there's a player. He's especially in love with anything by Bach but also likes Beethoven's Piano Concerto No.5 and Mozart's 'Jupiter' symphony. He said to me the other day, 'Mum, I've gone crazy for this music, I can't stop listening to it and it won't get out of my head!'. Bless (keep in my he's only 4).
Making this Lucy's Tomato, Walnut and Pomegranate Molasses Salad (with our own tomatoes and the pomegranate syrup Deb sent me - thanks Deb!) and this Lucy's Apricot Almond Chews. Delicious...
Re-organising my kitchen cupboards. Over the past fortnight I've broken two glasses, two mugs and a vase. My cupboards are so crowded that every time I open them something jumps out at me. I've been meaning to do it for a while but these recent losses spurred me into action. As a result I now have three lovely new fying pans (replacing six dreadful ones that can now be found in the local daycare centre sandpit) and room for all my many, many, many baking trays and tins.
Researching bathrooms - we need a new one.
Looking forward to the launch of two of the websites I've been working on for the past 18 months - not long to go now...
Marvelling at the Google Art Project. Have you seen this yet? Check out this post first and then go and have a play yourself - you won't be disappointed.

What have you been up to lately?
Posted by Caz at 9:09 PM