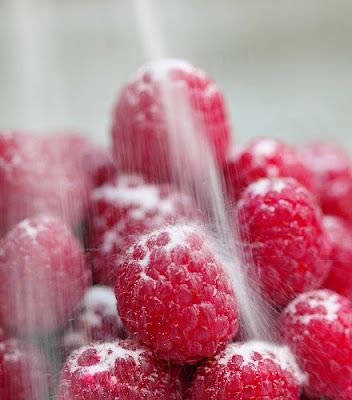 Summer has been a bit of a fizzer here so far - a few ridiculously hot days but most days barely making it out of the 20s (I've got longsleeves and jeans on today). Having said that, the berries have been great this season (we've even had a handful of bramble berries from a rose that's gone wild in our front garden!). The raspberries are particularly good - red, juicy and velvety and while I'd happily just eat them straight out of the punnet (and quite often do) I've also been enjoying them in these two incredibly simple recipes.

I first came across this Hands-Free Raspberry Jam recipe in Nigella Lawson's 'How To Be A Kitchen Goddess' but I think the original source is probably Elizabeth David's 'Summer Cooking'. If you've never made jam before you really must try this one - if you have you may never go back to the old way. Basically you just heat an equal weight of white sugar and fresh raspberries in two separate pie plates in a medium oven for about 20 minutes. Remove both dishes from the oven, add the sugar to the raspberries, stir et voila, you have the most delicious raspberry jam in the world. Because the jam has not been boiled you will need to keep it in the fridge rather than in the cupboard but it will keep in sterilised jams for some months.

The other thing I've been making with gay abandon is Jamie Oliver's 1 Minute Berry Icecream. I really love this recipe. It is equally good served immediately as a kind of 'soft-serve' or the next day when it has had a chance to harden in the freezer. Normally I'd leave the mint out of a recipe like this one (I always worry the kids won't like it) but it really does add another dimension to the finished dessert so be brave.