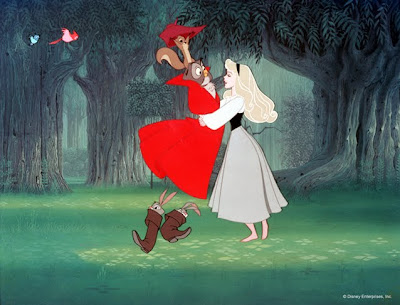 
This week we've been in Disney-overload. It's school holidays so going to the movies is mandatory in our household. Yesterday we saw the new Disney offering, Tangled and, wow, that step-mother is a quite a piece of work - manipulative, emotionally abusive, vain and just down right nasty. Tom and I cried several time during the movie while the kids gave us embrassed, slightly worried sideways glances. We've always been suckers for a great animated kid flick and used to go to them even before we had kids -there's just something about a universal story and the knowledge that good will always triumph over evil that I find incredibly comforting.

Earlier in the week I took the kids to see, Dreams Come True: The Art of Disney's Classic Fairy Tales, at ACMI and what a wonderful experience that was. This beautifully curated exhibition explores the development of seven of Disney's groundbreaking fairy tales including Snow White and the Seven Dwarves (1937), the first feature-length cel-animated film; Sleeping Beauty (1959) made in Technirama 70mm format; The Little Mermaid (1989), the last Disney film made using hand-painted cels and Tangled (2010) with its digital animation of 27 metres of hair!

While there's been lots of huff and puff about Disney's depiction of women, the exhibition actually focuses on the artistry and technology behind each film. Over 600 sketches, paintings, storyboards, maquettes, and original fim cels from the Walt Disney Animation Research Library are used to glorious effect to explore the journey of each film from concept to finished design. While it would be tempting to go overboard in the use of film excerpts in such an exhibition the footage has been carefully curated and placed at the end of each section after you have seen all the preliminary design work and read about the many design influences and challenges that led to the final product.

What I found most interesting was reading about the enormous range of influences the designers drew on - from the broad sweep of early European storybook illustrations, Persian, Arabic, Medieval, Baroque, Roccoco, 19th century French and Japanese art to individual designers such Erte (one of my favourite deco designers).

To round off our Disney journey we watched Snow White in all its digitally enhanced glory on DVD this morning. The comparison between the ultra-flat Snow White and super-3D Blythe doll-like Rapunzel from Tangled was stark but you know what? The kids still loved it and so did I...

PS: If you'd like to see some of the concept development behind Tangled you can go here or if you'd like to read something more serious about the world of fairy tales and their tellers Marina Warner's fascinating, From the Beast to the Blonde is a great if hefty read.
Posted by Caz at 10:14 AM