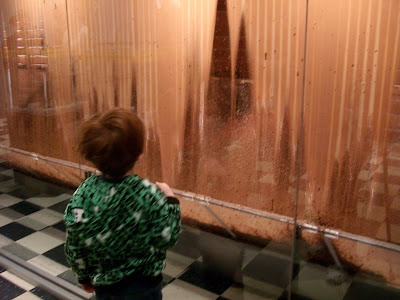 Henry getting very excited about the 'World's Largest Chocolate Waterfall' the day before he ended up in hospital. I don't want to sound paranoid but this is the third Christmas in a row that I've spent part of the Christmas season unexpectedly sitting beside a loved one in hospital. Last year I spent much of Christmas Day night sitting in the emergency department of our local hospital with Henry after he had a massive asthma attack bought on by suspected pneumonia.
This year we managed to get through Christmas and the weekend but by Tuesday night I found myself in a familar situation when Henry woke up gasping for air at about 3.30am. Off we rushed to the hospital again where he was put on oxygen when his oxgen saturation levels were found to be very low. Many doses of Ventolin, a chest x-ray, saline masks and vomiting later he was admitted to the short stay unit where we spent another two nights (with me on a very narrow fold out couch). He was released on New Year's Eve and we saw in the New Year (at the child friendly time of 10pm) with sparklers, party poppers and bubbles and it was lovely to see him smiling again free from oxygen tubes and with the colour returning to his cheeks.
As you can imagine it has been a very stressful time for all of us and I still find myself watching Henry breathing for signs that he is relapsing. All routine in the house has been thrown out the window. We seem to be sleeping and eating at weird times and counting the days until we can finally go on the holiday we were supposed to leave for three days ago. The fridge has been bare for days as we've been taking things 'one day at a time' and the kids have been packing on and off for days so it will be a relief to finally leave tomorrow for some sun and sand and the company of my gorgeous sisters and their families.

I hope your Christmas and New Year was a little more predictable than mine (in a good way) and I'm looking forward to hearing all about the exciting plans you have afoot for the coming year. I think plans and I are going to keep their distance for a while...
Posted by Caz at 10:01 PM