Nigel Triffitt and the Theatre of the Impossible 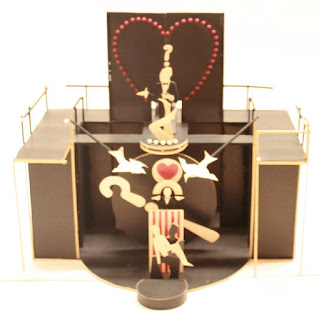 Yesterday I attended a very special gathering to honour the life and art of writer, designer, director Nigel Triffitt who died recently, aged 62. You may know Triffitt from his work as director and designer of the international smash-hit dance show,Tap Dogs, but he was so much more than that. In fact, his collaboration with choreographer Dein Perry and his work on the Sydney 2000 Olympic Games and Melbourne 2006 Commonwealth Games opening ceremonies were among his last theatrical endeavours.

During the 1970s and 1980s Nigel Triffitt was Australia's No. 1 enfant terrible, a badge he wore loudly and proudly. His pioneering visual theatre productions, Momma's Little Horror Show (1978) and Secrets (1983) marked a turning point in Australian theatre. In an industry still dominated by traditional text-based, plot-driven works Triffitt's wildly imaginative fusion of black theatre, puppetry and soundscape was a revelation. Boundaries meant little to Triffitt and he moved easily between performance genres displaying the same ingenuity and meticulous attention to detail whether designing for theatre, dance, opera, musicals or rock bands.

In 2002, I was lucky enough to hear him speak at the National Puppetry and Animatronics Summit held in Melbourne. By that time he had assumed the role of tribal elder and spoke with great wit and humour about the industry he helped to jump-start. You can see even from this edited version what a remarkable mind he had.

If you're in Melbourne you can see some of Triffitt's exquisitely assembled balsa wood set models currently on display at Arts Centre Melbourne, if you're not then you can admire them here.

You can also enjoy Triffitt's non-theatre related writing at Triffitt (family history) and The Great Stumble Forward (travel).
Posted by Caz at 2:25 PM