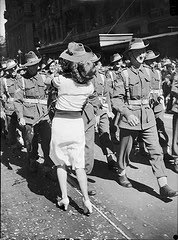 I have always had a fascination with the 1930s and 1940s. I think it started while watching classic Hollywood movies on TV with Mum when I was quite young. Both my Nanas were also 30s women in a way. Nana Stoner loved the glamour and celebrity of the Hollywood stars while Nana Laffan had more of the 'make do and mend' mentality having lived on the land through the Depression and the War.

My interest in this area has continued to grow over the years so when I came to choose my Masters topic I naturally chose something that would let me immerse myself in the era. For two years I researched the impact that the stationing of American soldiers in Melbourne had on the music and dance styles of the time. The more I researched and interviewed people the more I came to realise just how different life on the wartime homefront was from the period preceding it. Youth was honoured over age, working women became as highly valued as home-makers and public life and duty stole the limelight from life centred around the home. There was also an ever-present tension between the need for public control and the heightened private desires fuelled by the romance of the ballrooms.

One of the things that has peaked my interest in this area again is two new exhibitions about the period. The first is Of Love and War at the Australian War Memorial which looks at the impact of war on relationships and 'the ways in which Australians incorporated affairs of the heart into their wartime lives'. You might like to checkout the photostream on Flickr Commons.

The other exhibition was curated by my thesis supervisor and is called Over-Paid, Over-Sexed & Over-Here?. This exhibition explores the myths surrounding the American marines stationed in Melbourne during 1943 the same peiod I researched and I'm hoping to see it next week.

So what's your secret fascination? What things do you clip out of the newspaper, read about, collect? Do you have a special area of interest that you keep a little secret?