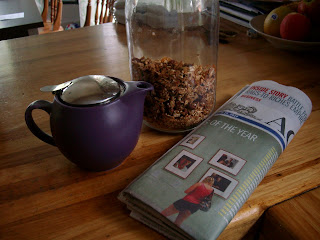 1.Preheat the oven to 160C (or 140 if fan-forced). Line a large shallow tray with baking paper (I always have to use two).
2.Place honey orange rins and juice in a small saucepan over a low heat for 2-3 mins until honey is melted.
3.In a large bowl, combine all dried ingredients except dried fruit. Add honey mixture and toss to combine.
4.Spread mixture onto trays and bake until golden and crisp (anywhere between 10-20 mins depending on your oven) stirring occasionally as the outside bits often brown more quickly than the inside bits.
5. Cool on trays then stir through dried fruit. Store in an airtight container for up to 3 weeks. Serve like regular cereal with milk or use it to sprinkle over yoghurt or fruit.
Enjoy!
Posted by Caz at 11:11 AM